Deprecated: The called constructor method for WP_Widget in ContactUsForm_Widget is deprecated since version 4.3.0! Use __construct() instead. in /home/egreenew/public_html/wp-includes/functions.php on line 5418
 iAIRE Launches Patented Solar HVAC, Disrupting the Market with Cost Savings, Energy Efficiency - eGreenews 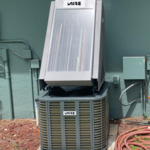 INDIANAPOLIS–(BUSINESS WIRE)–Despite a large majority of Americans supporting solar technology, accessing high-quality, energy-saving resources remains out of reach for many consumers. iAIRE, a leading designer and manufacturer of customized solutions for cleaner air and reduced energy costs, is looking to change solar access with the launch of its patented Solar HVAC for homes and businesses across all industries.

iAIRE’s breakthrough technology not only saves money on equipment, installation and operations but also works up to 50% more effectively than other systems currently on the market. Designed for peak performance, it’s the only system with an American-made solar panel, compressor VFD for motor speed and control logic for operation.

“We’re thrilled to present our Solar HVAC, which harnesses the sun’s energy to generate heat instead of generating electricity,” said Chuck Eno, vice president of sales at iAIRE. “This system builds pressure in the refrigerant, reducing the amount of energy consumed by the compressor, which is typically responsible for up to half of the energy used by an HVAC system.”

iAIRE’s Solar HVAC is also the first HVAC system designed to be effective in most climates. The system’s unique film, designed by the National Renewable Energy Laboratory, utilizes all spectrums of sunlight to generate heat, making it more efficient than a traditional solar film which requires direct sunlight.

Manufactured in the United States, iAIRE’s solar panels are tailor-designed for new and retrofitted equipment and mounted directly to the unit, saving on real estate as well as equipment and installation costs. Additionally, iAIRE’s 5-ton solar panel is about the same physical size as a traditional solar panel – but provides substantial ongoing utility savings over conventional HVAC equipment.

“With the launch of the Solar HVAC, we’re proud to deliver on our mission to make solar more accessible through reduced costs and to help people to live out their values by reducing carbon emissions,” said Joe Finkam, CEO at iAIRE.

The federal government currently offers a tax credit of 40% – 30% for solar panels, with an additional 10% for American-made solar panels such as iAIRE’s. For a more detailed look at these incentives and to learn more about the overall benefits of iAIRE’s Solar HVAC, visit myiAIRE.com.

Additionally, those attending the 2023 AHR Expo are invited to meet the iAIRE team at Booth #7567 at the Georgia World Congress Center in Atlanta, from Feb. 6-8, 2023.

iAIRE, LLC was founded in 2013 with the concept of adding ionization to outside air systems that provide energy savings for commercial business operators and healthier, cleaner air for their employees and customers. As the benefits of its ionization products have been realized and the business has grown, iAIRE’s product offerings have increased. Today, iAIRE designs and manufactures the highest efficiency HVAC units on the market, serves businesses across all industries and homeowners, and works to reduce harmful emissions output and alter the path of climate change.

United Nations thanks Liberia for its contribution to…